Get fresh music recommendations delivered to your inbox every Friday.

from The Blackboard EP by Supastition 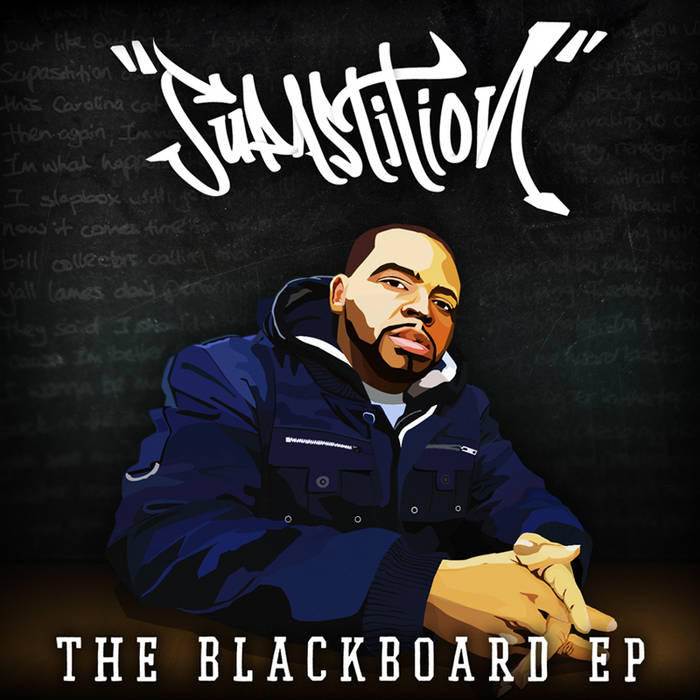 During my hiatus, I felt mistreated by a few people who treated me different when things were going well in my career. It seemed like after Chain Letters was released, folks that I called friends started disappearing and going their separate way... until they needed a favor from me. ‘Perfect World’ was the song that I needed to vent and get things off of my chest. This is far from a diss song and more of a brutally honest version of my side of the story. There’s a big difference between ‘friends’ and ‘people I’ve done songs with’. Croup blessed me with this track awhile back but he went back and updated the beat to add more elements to it. Dominique is a singer from Germany who I’ve spoken with a lot since maybe 2005 or 2006. I had ignored this song for years until my manager, Sav, asked me why I had never did anything with it. The original version of this track was a completely different topic but I was compelled to use this platform for something else. From there, ‘Perfect World’ was born.

Intro:
So with us, we must be beneficial to those who have befriended us.
Or those whom we have allowed to befriend. If they are making a mistake,
it is our duty to tell them that you are going wrong here. And if we don’t tell them... we are going to be making an even bigger mistake.
We are going to be responsible.

Chorus (by Dominique):
If I could change anything in life I would try to make things right No drama, no war, no fights.
I would make it a perfect world.

Verse one:
My life’s been a series of tough lessons
mistakes, misfortunes, victories, successes
couple of masterpieces, couple of rough sketches
eye opening moments that altered my perspective
cause when the music ends, I discovered what a true friend is
it’s not your fans, record label, or your crew members
it’s the friends with no agendas or minor plots
who still keep in contact whether you rhyme or not
whether you’re signed or not, whether your last album kindly flopped or it’s still on Billboard climbing spots
yes indeed it hurts when you see people in spurts
homies disappear then reappear when you need a verse. when my daughter was hospitalized for a month
do you think a member of my old crew called once?
but when they heard I was returning with some new music they sent so many messages. I’m through with you losers that’s the way a brothers treated by his own fam?
I’m through with trying to work it out, I’m through with phone rants
I’m reprogrammed, a different Kam
I applaud you as a rapper but fuck you as a grown man. your records out, they wanna reconcile and do tours
I got a family, what the hell I need a crew for?
to me it doesn’t hold much significance
maybe we can just discuss our differences... in a perfect world

Chorus:
If I could change anything in life I would try to make things right No drama, no war, no fights.
I would make it a perfect world.

Verse two:
There’s a lot of things I gotta accept to be in this business weighing pros and cons like a soldier re-enlisting
while I was gone, so called friends treated me different maybe for me to see it I truly needed the distance
I left the game fed up. I couldn’t tell you the whereabouts of names that I shouted out on Chain Letters
that small scale fam was more than I had bargained for seeing industry friends walk through revolving doors seeing some producers that you helped build a buzz
treat you like a peasant the second they start feeling loved I guess it’s just a reminder to me how real it was
fame will make a humble man feel godly
when I was on the rise, they was with me, beside me
but stopped speaking when they reached the 50’s and Kweli’s
I’m still standing even when they abandoned the lesser known
but personally I just felt like a stepping stone
and they won’t give a damn about it ‘til the wealth is gone I humble myself and tell ‘em “thanks for helping, homes” ‘cause regardless I’m an artist with a platform
when former friends see success I still clap for ‘em
I speak freely with no fear of being blackballed
‘cause if it ain’t God then whose permission do I ask for? the truth hurts when the words are thorough
you take offense? we can make amends... maybe in a perfect world

Little Brother joins the show to discuss their beautiful journey, plus tunes from Fat Tony