Get fresh music recommendations delivered to your inbox every Friday.

from Yada Yada (Prod. by Marco Polo) by Supastition 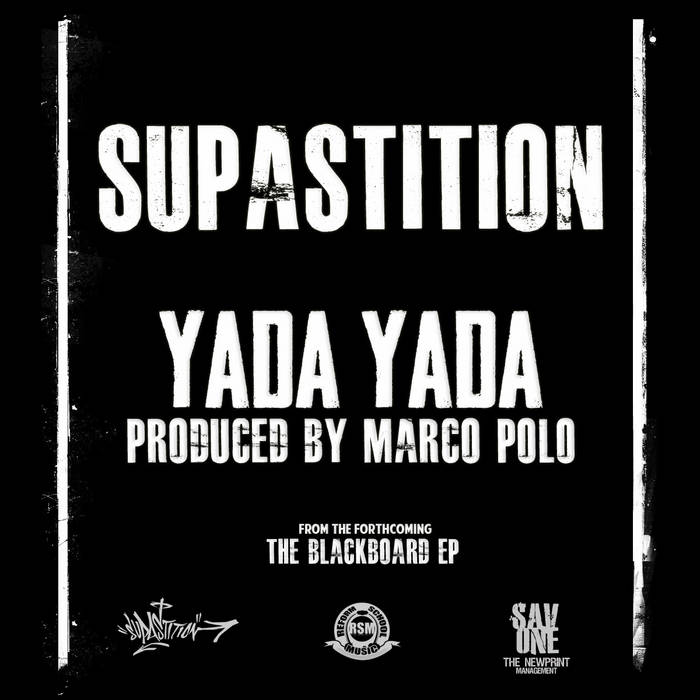 After a long hiatus, Supastition returns with the Marco Polo produced, “Yada Yada”. The adrenaline-charged “Yada Yada” is the first single off of “The Blackboard EP,” which will be released on Tuesday, January 15, 2013 via Supastition's Bandcamp.

The Blackboard EP, a FREE 8-track project, serves as a “thank you” to the listeners who continued to support Supastition’s music after his sudden departure from the music business in 2010. Returning to the vintage Supastition sound, production on the EP will be handled by Marco Polo, M-Phazes, Veterano, Rik Marvel, and more.

It's the return of your recurring nightmare
southern messiah who only rock the flyest Nike Airs
industry black sheep trying to fight being typecast
screaming NC 'til they put me in that white casket
it's the day of reckoning, I'm the wrecking ball when the record spins
since the ?uest recommend, I've counted consecutive wins
been in so many cities you would think I teleport
keep fans eyes bulging out like Tracee Ellis Ross
read between the lines, I define unsung
continue to son dumb n*ggas 'til the funds come
and anybody trying to stop the agenda
will see I got a hotter temper than a mafia member
I rapped alongside Crooked I, Phonte, Elzhi
they look at I, reply "he's no Kanye sales-wise"
keep it one hundred when others respond and tell lies
I'm humble, keep my head screwed on and held high
I never let the fame command me, I've seen it turn
righteous n*ggas into Amos and Andy, jigaboos
hip hop's my humble abode, I treat it like royalty
but these youngs boys, they be pissing all on the toilet seats
disrespecting legends, someone call the board of ethics
these dudes ¼ skill and three quarters reckless
yelling 'bout the legendary, legend what!
you don't even measure up to the Kanes and the Lord Finesses

Now everybody screaming they the king, yada yada
they making outlandish claims and nobody's bothered
tell them fools stay in their lane, they out of order
don't make me grab one of these young lames by the collar

Before you ever spend money on anybody's product
find out if they're about integrity or 'bout a dollar
somebody gotta tell it like it is so Mr. Moye
came back to kill the villains and fill in the missing void
sorry to disappoint those who didn't miss the voice
continue ignoring me like normally there is a choice
let the rest rejoice.... (crowd cheers)
never test your boy, I keep liquid swords in my reservoir
metaphors, similes, double entendres
the bars stay consistent as the Baltimore crime rate
slaughtering beats when I record report 'em deceased
f*ck a critic, skins thicker than a Nautica fleece
got your girl on all fours, how about some hardcore
like a horny Nautica Thorn in a porno release
got her performing for me while you wasting time in the studio
pretending to be some kind of king in a Coogi robe
I undress beautiful ladies without the loot to show
quicker than a 60's hippie can have a doobie rolled
ask me to do a show, you better have the show deposit
or point promoters to the exit with the door revolving
now you can say it's good promotion for me, yada yada
and this gone put me in the ranks with the hottest artists
but before I am a rapper, I'm somebody's father
and you always get what you paid for.... nada nada...
yada yada.... the yada yada...
It's still Supastition, n*gga!

Little Brother joins the show to discuss their beautiful journey, plus tunes from Fat Tony